Ronaldinho is a world-famous Brazilian footballer who is considered by many as one of the greatest football players that have ever walked the face of the earth.

Regarded for his technique, tricks and dribbling, he was part of the Brazil national team that won the FIFA World Cup in 2002. After making his very first senior team appearance in the world cup that year, he scored the winning goal for his country against England to secure a place in the Semi-finals.

Alongside Rivaldo and Ronaldo, he was part of the attacking front three that made the Brazilian national football team one of the most formidable in international football.

Born as the son of a footballer, Ronaldinho developed an interest in the game in the early stages of his life and started playing in youth club matches by the time he was age eight.

He first caught the attention of the media when he scored all 23 goals in a 23–0 win against a local team when he was just 13 years. He became identified as a rising star and debuted in the 1998 Copa Libertadores for his senior career.

A good performance took him to France where he signed a five-year contract with Paris Saint-Germain football club in 2001. He later moved on and joined FC Barcelona of the Spanish league and made many accomplishments over the next few years.

He won two FIFA World Player of the Year awards in 2004 and 2005, among many other honours. In this article, there’s a lot that you will find. Starting from Ronaldinho net worth to his career highlights and personal life, we have got you covered. Simply read on for more.

Ronaldinho was born and raised in Brazil. He was born on 21 March as the son of Joao de Assis Moreira and Dona Miguelina Eloi Assis dos Santos.

His father played football for Exports Club Cruzeiro when not working in the shipyard. His mother worked as a salesperson and nurse. His siblings are Deisi and Roberto.

Ronaldinho started his football career as part of the gremio Gremio youth squad team between 1987 and 1998.

His performance at that level got him the attention of many big teams in the world, including Arsenal FC of England who wanted to sign him in 2001 but couldn’t seal the deal because he was not an EU player.

He had not competed much on an international level and due to that, couldn’t obtain a work permit. He would have joined a Scottish Premier League side but couldn’t make it through because of an issue regarding a fake passport saga in Brazil.

In 2001, French League giants Paris Saint-German came calling and Ronaldinho was signed on a five-year contract. He would play in a top team which had the likes of Aloisio, Nicolas Anelka, and Jay-Jay Okocha as top stars.

Joan Laporta, the president of FC Barcelona at that time, had his eyes on England international David Beckham. However, Beckham moved to league rivals Real Madrid, leaving the president with no option but to look for an alternative.

After just two seasons in France, Ronaldinho moved to FC Barcelona in Spain, and played for the Spanish team for five years from 2003 to 2008, before moving to Italy where he joined AC Milan.

He left the team in 2012 and recorded stints with other football teams like Flamengo, Atletico Minero, Querotaro, and Fluminese.

The playmaker and his brother were arrested and imprisoned early in the year2020 in Paraguay over an issue with his travel documents.

He was a member of the brazil national team during his prime, helping his country compete at top-level tournaments in the Olympics, World Cup, and others. 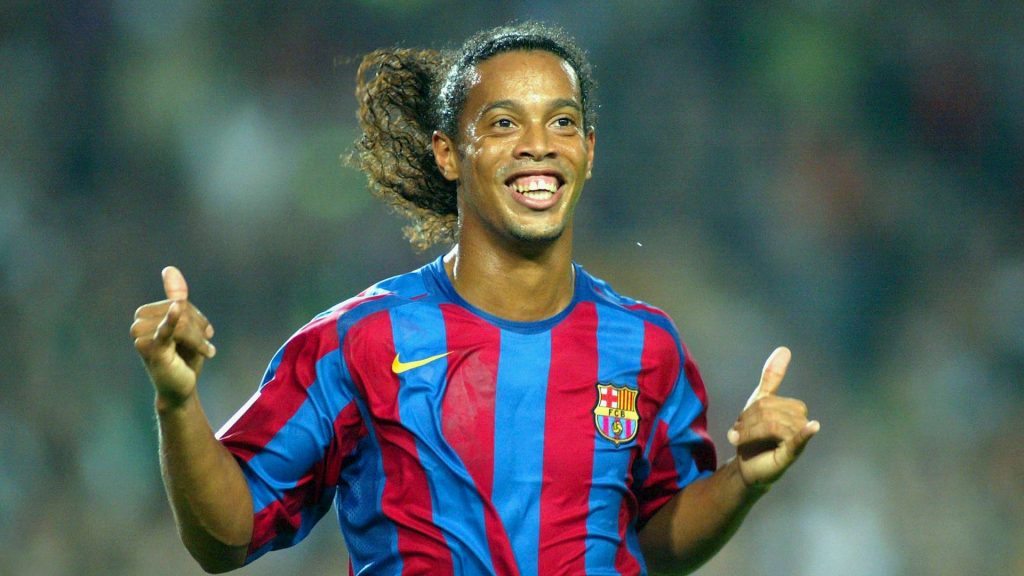 Ronaldinho is a two-time FIFA World Player of the Year. He has won the Ballon d’Or, a FIFA World Cup trophy, and many more honours at the club level.

Ronaldinho shares a son with the Brazilian dancer Janaina Mendes. Their baby boy, born in 2005, was named Jaoa after Ronaldinho’s late father.

The family, therefore, relocated Porto Alegre, where the house was located. Roberto’s career was a short one due to injury problems.

He now serves as Ronaldinho’s manager. Their sister also has been given a role as the football legend’s press coordinator.

For being a footballer who played in the topmost levels of sports, Ronaldinho has made a lot of money for himself and his small family. His primary source of getting income has always been football.

He participated in the game as a member of different football teams for over twenty-five years, and also represented his country at the international level, and this means that he definitely earned a reasonable salary during his peak.

He signed a contract valued at €22.2 million and this was after his reign as one of the best players in the world. Declining careerwise due to age, he moved back to South America and played for teams such as Minero and Flamengo.

Ronaldinho is known to like fancy things. His Beach front home located in Spain is a true reflection of luxury.

It is said to have cost the Brazilian dribbler several millions of dollars. His car collection consists of a Hummer 2, an Audi Q7, Bugatti Veyron, and other pricey rides.

He currently has a net worth of $90 million. His record says he is a great player and one of the very best of his time, and this is an indisputable fact.