Scottie Pippen is a former basketball player most remembered for his tenure with the Chicago Bulls of the NBA. The American was a part of the Bulls’ iconic team that won 6 NBA Championships.

Along with Michael Jordan, Scottie played a significant role in transforming basketball from what it was to an international sport and secured a place for the Bulls in basketball history.

He was also part of the US Olympic gold medal-winning teams that won the medal in 1992 and 1996. He is the only basketball player in history to have won an Olympic gold medal and an NBA title in the same year twice.

As a professional player, Scottie played the game actively for 17 years, spending 12 of those years with the Chicago Bulls, 1 with Houston Rockets, and 4 with the Portland Trail Blazers.

He is a two-time Naismith Memorial Basketball Hall of Fame inductee and has earned several more honours and awards for his contributions to the game.

Born in Hamburg, Arkansas, the United States on September 25, 1965, Scottie Maurice Pippen is the youngest of the 12 children born into the family of Ethel and Preston Pippen.

Ethel and her husband, Preston, were both over 6 feet tall so their children inherited this trait, with Scottie being the tallest at 6’8”.

Scottie’s father worked at a paper mill at that time and later suffered a stroke which rendered him paralysed, and barely able to speak or move until he passed away on May 10, 1990.

Pippen started falling in love with basketball during his childhood days. As a teenage boy, he dreamt of playing one day and even making the winning shot in an NBA Championship one day.

He attended Hamburg high school where he was a part of the Hamburg Lions basketball program. Despite his impressive performance in high school, he did not attract interest from any of the college scouts and eventually joined the University of Central Arkansas in Conway, where he played for the Central Arkansas Bears for four years appearing in a total of 93 games.

In 1987, the Seattle SuperSonics of the NBA selected him to join the team. He was later sent off to the Chicago Bulls where he had the best greatest moments of his life and career playing side to side with the legendary Michael Jordan

Scottie got his big break before Jordan retired from the game in 1993. The duo were able to take the team to a global level, and also created broader publicity for the NBA.

After serving the Chicago Bulls for nearly 12 years, Pippen was traded to the Houston Rockets team where he played for four years before joining the Portland Trail Blazers for one season.

Five years after Pippen retired from basketball, he joined Chicago Bulls again as a team ambassador and was offered a position as the senior advisor to the President and Chief Operating Officer of Chicago Bulls in 2012.

He has also found a career as a brand endorser since he stopped playing. He promotes brands and appears in many commercials, through which he reportedly earns a good sum of money. 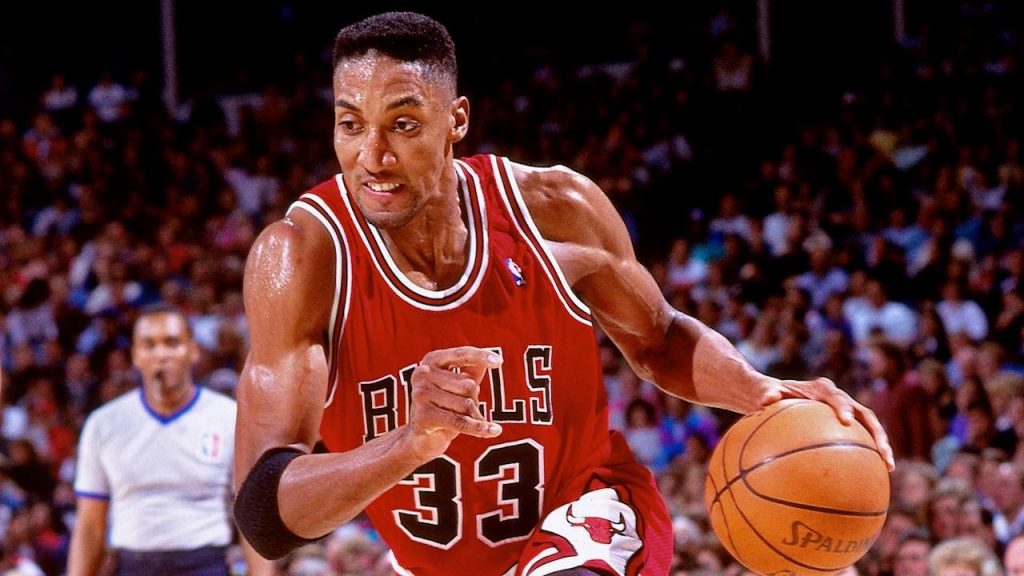 Throughout his NBA career, Scottie Pippen showed to be a serial award winner. His cabinet of trophies and accolades is loaded with all he has amassed in a career which lasted 17 whole years.

He was also part of the US Olympic gold medal-winning teams that won the medal in 1992 and 1996. He is the only basketball player in history to have won an Olympic gold medal and an NBA title in the same year twice. Additionally, he has been named as one of the 50 Greatest Players in the history of the NBA.

This former basketball player is known to have married twice in his lifetime. His first marriage was in 1988 to Karen Mc Collum. They went their separate ways two years afterwards and he married Larsa Younan in 1997.

Scottie has four children from his second marriage, Including Scottie Jr., Preston, Sophia, and Justin. He also has two more daughters outside his marriage. One with a former girlfriend, and the other with his former fiancée.

Mr Scottie Pippen is currently 54 years old as of this writing. He has left the game as a player but is still seen as a legend and ambassador, as well as an advisor. He has a height of 203cm and a body weight of 102kg.

Often referred to as one of those notable Icons that expanded the NBA into what it is today, Scottie Pippen played his part in the game of basketball and did so well to the extent of being recognized along with other great names in the sport.

He played the sport actively for a total of 17 years and was a member of three different teams in the NBA. His wealth mainly came from his playing career which saw him bag lucrative deals that came with mouth-watering salaries and bonuses.

Even after retiring, he still makes a great deal of money from basketball by occupying positions as a team ambassador and senior advisor to the President and Chief Operating Officer of the Chicago Bulls.

He also represents other brands and makes a reasonable income from doing this. He has been able to amass all this fortune by himself through a successful career, so he now enjoys his retirement with his family and friends.

Scottie Pippen net worth is $60 million as of 2022. He has always been a focused and determined sportsman all his life, so his success can be dedicated to his unique attributes as an individual.